Just to be obtuse, I have decided to listen to a raft of albums that are "less than favoured by critics and public alike" (I read that somewhere, can't remember where or when though)
These albums are often derided not necessarily for the content, but due to the sheer numbers they sold in, and their relative familiarity/ubiquity (or, in the case of 'Be Here Now', a complete and utter let down from what was expected (in the words of Public Enemy "Don't Believe The Hype"))

There, that wasn't too painful was it?
Conclusion: Don't be afraid of mass appeal, critically looked down upon albums - they're usually not that bad
(mutters to self: "now wheres my copy of 'No Parlez' by Paul Young?" - oh dear, that might be a step too far I think)


From Albums that don't seem to have a lot of love, to a band in a similar position.
Ladies and Gentleman, may I present for your delectation:

'12 Gold Bars' was one of the first albums I owned.  I remember playing the tape so much it wore out.  It was eventaully replaced with a double vinyl copy of '12 Gold Bars Volume I + II'.
Proper 'head down, no nonsense boogie' - if you were an aspiring Rock fan, this was the album(s) to own.

Quo are one of those bands that (nearly) everybody has heard of, but few admit a liking for.  Actually, these same people don't exactly admit a DIS-liking for either.  They are just one of those things, like the ravens at the Tower of London, which if they were no longer there civilization would cease to exist (a bit extreme perhaps, but you get the general idea) and a longevity that any band should be proud of.
OK, since "Anniversary Waltz" they have basically become a cabaret band and a parody of their former selves.
But they have: an envious song catalogue, two frontmen who could do a half decent turn as a comedy double-act.
And there always remains the one question: "Will they ever stop?"

A Gift from a 1970's Childrens TV Character 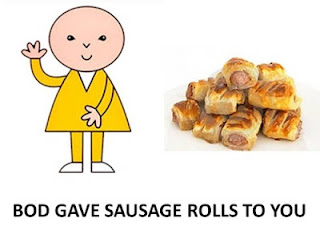 (Well I thought it was funny)

... and now the actual song, which obviously made my brain go a bit weird when I heard it this morning

(Argent - God Gave Rock and Roll To You)
Posted by Rigid Digit at 18:16 No comments:

There is more than one way to say "I Love You".

That's why I have bought the wife a Thesaurus
Posted by Rigid Digit at 19:05 No comments:


Jukebox Musicals - these are musicals specifically written around the catalogue of a particular performer
Recent "must see" musicals have included:

and not all of these were written by Ben Elton.

For no other reason than "I haven't listened to this for years", I spent 40-or-so minutes listening to 'Bat Out Of Hell', and came to the following conclusion:

The Track Listing is wrong - changing the order provides a sort of narrative/story, meaning 'Bat Out Of Hell' may be considered as a Concept Album, or indeed ideal source material for a mass-marketed popular jukebox musical.
The Actual Track Listing of the album is:
"Bat Out of Hell"
"You Took the Words Right Out of My Mouth (Hot Summer Night)"
"Heaven Can Wait"
"All Revved Up with No Place to Go"
"Two Out of Three Ain't Bad"
"Paradise by the Dashboard Light"
"For Crying Out Loud"

The "pimped version" is:
"All Revved Up with No Place to Go" - Boy getting ready to go out.  But where?
"You Took the Words Right Out of My Mouth (Hot Summer Night)" - Boy Meets Girl
"Paradise by the Dashboard Light" - Boy and Girl do it
"For Crying Out Loud" - Argument, followed by Boy's pleading and explanation
"Two Out of Three Ain't Bad" - Girl's response
"Bat Out of Hell" - Boy is miffed.  Rides off in a temper, but he din't see the bend in the road
"Heaven Can Wait" - He's not yet dead, but is clinging on

And all the above takes place in one evening.
A little far fetched perhaps, but it may be the next "pop music" musical in the West End.
And expect to see a primetime BBC Saturday evening show called "The Meat Raffle" (or something equally witless ("Meet Meat"?)).  It will be hosted by an over-excited leprechaun (Graham Norton) and will probably have a judge panel of David Essex, Paul Nicholas, Elaine Paige and Andrew Lloyd Weber.
Posted by Rigid Digit at 15:54 No comments: