I Want To Live In Wokingham

The Unitary Authority with the Highest Average Personal Well Being score in England.
(I used to live in Wokingham UA, but was asked to leave because I was a miserable sod)

However, if you live around Stoke-On-Trent or Inner London, then you'll probably be singing this song:

If you're feeling bored and want to read the whole thing, here it is:
http://www.ons.gov.uk/ons/rel/wellbeing/measuring-national-well-being/pe...

Does this Survey offer any mind blowing insights, or new information?
Does any Survey do that?
After all, it's widely accepted that 64.7% of all Statistics are made up.

Another Survey that is worth reading, offering a different view, is Britistics (http://theavamovement.com/Britistics_Matthew_Rowett_PDF.pdf) - even if just for the information that "Mums spend 7 minutes pairing socks and folding clothes after each wash"
Posted by Rigid Digit at 19:43 No comments:

This was the title of Haircut 100's first single.
It is also an apposite title to waffle on about my favourite T-Shirt of days passed. 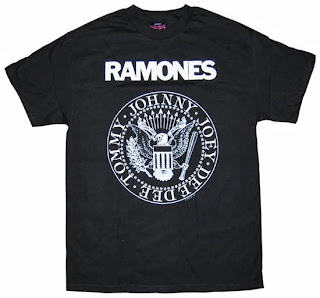 The Ramones T-Shirt, bought in the heady days of no responsibility, living at home, spare cash (ie 1988), and finally laid to rest in 1993.
(I feel I must qualify ownership of said T-Shirt, in that purchase was a fandom purchase, and not a fashion statement).
A five year life span for a T-Shirt is pretty impressive, even more so when you consider the amount of wear it had.  Towards the end of it's life, it had faded from jet black to a washed out mottled grey with flecks of white.  It was peppered with cigarette burns, food stains and fraying edges.
And yet still I continued to wear it - it almost became an instantly recognisable part of my existence, a calling card.
"I didn't recognise you", people would say, "wheres The Ramones shirt?"
And then one wash too many finally killed it.  It was pulled from the Hotpoint, one arm had fallen off, the neck became detatched from the body and some of the larger burns expanded and coalesced to make a second neck hole.
The garment was given a full viking burial - it was set alight and floated across the fish pond accompanied by  "I Wanna Be Sedated".

In the late 90s (or so), the retro T-Shirt market took off, and the wearing of pre-stressed garments from the 80s became a fashion statement.  In my cynical style, I often wonder if the wearers of such garments actually know who Lemmy is, or can hum the opening bars of Led Zeppelin's 'Rock and Roll".
Although, sometimes my cynicism is left ungrounded:
Whilst visiting a local watering hole, I noticed that the barmaid (I'm guessing early to mid 20s) wearing an OMD Architecture & Morality T-Shirt.  She served the pint and I said: "good band, good album" (to deflect the fact that she might think I was just staring at her chest).
I expected the reply: "Are they? Never heard of them, but the T-Shirt looked nice in the shop".
No - she then proceeded to tell me that Architecture & Morality was, in her opinion, OMDs best album. A nerdy conversation about early 80s synth bands ensued, and I got a free pint into the bargain.

And now, the retail market for the retro band T-Shirt has infiltrated the high street.
Tesco has provided my wardrobe with a couple of Beatles T-Shirts (for information: Yellow Submarine & Abbey Road), and a replacement Ramones T-Shirt has been procured from ... Primark (the range also includes Jimi Hendrix, David Bowie (Aladdin Sane), Rolling Stones Lips, Pete Docherty and Samantha Fox).
So 20 years after the original met a firey/watery end, I now have a replacement.
Now I'm on the look out for a Monster of Rock 1988 T-Shirt.
Posted by Rigid Digit at 19:35 1 comment:

Against My Better Judgement

I will now be joining the 21st Century.
Two or three months ago, the current Mrs D decided to drop her mobile phone, shattering the screen in the process.  It was still usable, but there was a danger of getting shards of glass stuck in your cheek after every phone call.  And being one of those new fangle-dangled Smart Phone things, it became increasingly difficult to operate without slicing the tip of your finger.

The price of repair/replacement was a bit steep, with no insurance and no immediate chance of an upgrade.
A new phone contract was sorted out with a new supplier  - the amount of freebies (ie a 7" Tablet and a Digital Camera) probably swung the deal.  But we still had the old SIM card and a broken phone, and another few months until it could be cancelled without incurring charges.

When the day came, I phoned the supplier and stated my wish to cancel the contract.  As I had been with them for about 10 years (or so) and they provide all the TV, Broadband and Telephony, I was offered as a good will gesture, a reduced price SIM Only deal, and a free handset (whilst maintaining the discounts I have on the other packages).

So now I will take possession of my first mobile phone - I will no longer be able to claim blissful ignorance and luddite-ness of the modern world.
Nor will I be able to hide behind the excuse: "Sorry, I forgot what time it was and had no way of contacting you"

The handset itself is a dead basic version, able to make and receive calls and texts, and ... that's about it.
Well, if I have to have a phone (and I'm told that I do) then that is really all I want to do with it.

In the eyes of my wife and children, I am still a technophobic dullard, but its a start


Now, what about this FaceTube thing?
Posted by Rigid Digit at 19:51 No comments: