Personally, 2015 so far has been a bit of a sh*tter.
Musically, there has been plenty of fine sounds attacking my lugholes.

* or whatever number I happen to think of

The debut album release from Australian Singer/Songwriter is a bright sound punctured with humourous, deadpan lyrics, bolted to a folk-ish, indie sound.  The music veers into Garage-Punk, and stabs of The Doors and The Stranglers along the way.  Her voice is reminiscent of Sheryl Crow, and the final track, the plaintive "Boxing Day Blues" featuring just an acoustic guitar and voices, evokes Suzanne Vega.  So, that's pretty much all bases covered then?

There is wit and humour in the lyrics and all delivered in an open narrative, often deadpan, style.  The choice of words and the detail used provide vivid imagery of the storyline of the songs, and there is often a turn of phrase which grabs attention.  Considering the lyrical construction as a whole, when she sings "I'm thinking of you too" in "An Illustration of Loneliness (Sleepless in New York)", you can't help but wonder is she actually singing "I'm Thinking of U2"?

Recorded in a two week period, where the songs were presented to the band only when they were finished, there is a freshness about the songs and the performances.
There are a variety of styles over the 11 tracks - indeed, if one track's style setting is not to your taste hang on, there will be something different along in a minute.

"Elevator Operator" has a touch of early Sheryl Crow, "Pedestrian at Best" is a fuzzed Garage Punk.  There is Indie Rock balladry on "An Illustration of Loneliness (Sleepless in New York)", and a full on near 7 minutes Blues Jam on "Small Poppies".

Thats 5 tracks and 5 different styles already.
And it don't stop there. From the naval gazing mundanity of "Depreston" to more Psych/Garage on "Aqua Profunda!".
The track "Dead Fox" has been doing the rounds of 6Music for a couple of weeks, and I find it difficult to get bored of it.  Bright, shiny, jangly pop - just right for the beginnings of Summer at the moment.  More indie/Garage on "Nobody Really Cares If You Don't Go to the Party", and a sort of Blondie/Stooges mash-up on "Debbie Downer".
"Kim's Caravan" comes along and seems out of place somehow - it is dark, almost haunting and bleak.  But it is an epic song and sequencing towards the end is the right place.
The album closes on the sparse (vocal and acoustic guitar) "Boxing Day Blues".

Car design has always been unique to manufacturers.
A particular manufacturer could be spotted a mile off by virtue of its particular character and style.
With one glance, you would never cofuse a Jaguar XJ12 ans a Skoda Rapide.

And then in the 1990s, car companies started joint-venture operations and the use common parts.  There were some minor stuling differences, and obviously the badge, but in essence it was the same panels, bolted together by the same robots, often in the same factories.

The sharing of component parts and technologies is fairly commonplace.  But is usually limited to the bits you can't see.  Just about every small/medium sized Fiat is built on the Panda chassis and running gear.
In latter years, SAABs were basically Vauxhall Vectras with a different body.  And the Jagur X-Type and S-Types were built on a Mondeo chassis and running gear, with the bodywork and interior breathed on by Jaguar.

At a Motor Show in the late 80s, I was surprised when looking around an Aston Martin that the interior switches, indicator stalks and even the gear knob were straight out of a Vauxhall Cavalier.

When the Fiesta (and all other Ford Vehicles) were re-styled a couple of years ago, there was a noticeable similarity in the front-end to and Aston Martin DB9.

But, having recently changed cars to a Vauxhall Insignia, I am noticing more and more similarities between the front ends of a wide range of vehicles.
There seems to be a universal approach to the design of the front end of similar sized cars.  Indeed, at first glance, it is often only the badge that gives a clue as to what manufacturer it actually is. 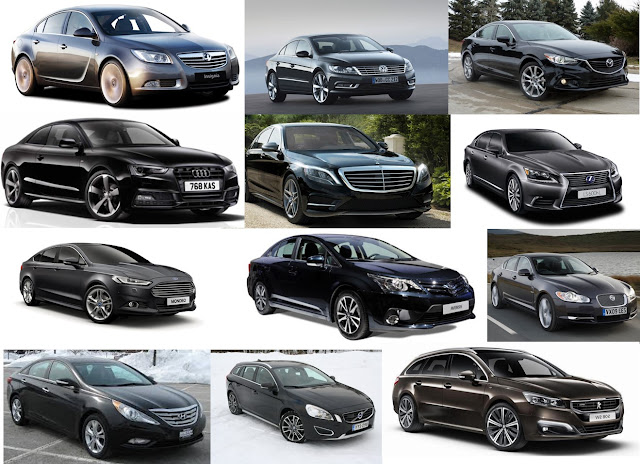 And it's not just the front - the back (give or take a bit of chrome strip) and the profile view (particularly on Estate variants) follows the same formula.

Maybe the Design Studio is in Stepford?

(Here endeth the Rigid Digit Text Audition to be the next presenter of Top Gear)
Posted by Rigid Digit at 15:21 No comments:

In  a past life, Cathal Smyth traded under the name Chas Smash, and was perhaps the nuttiest of the Nutty Boys (except maybe Lee Thompson?).  He was also the author, or co-author of some of the most exuberant moments of the bands releases, as well as some of the darker tinged moments.

The first obvious statement to make about the album is if you come to it expecting a 21st Century Nutty Boy shouting "Hey You! - don't watch that. watch this..." and prancing round the stage, then you're in for disappointment.
This album as a collection of stories from a man who has been through the mill, come out the other side, and is willing to share his experiences.
The past is represented by the involvement of Alan Winstanley, and particularly Track 2 "Shabat She Comes" which is perhaps the closest to later period Madness of all the songs here.

The songs on this album have been gestating and developing since 2005 (the time of Cathals marriage breakup, and followed by a life of hedomism, Ibizia, booze and stimulants).
This period led to a clearance of the mind (via a hallucinogenic experience with a Peruvian shamen, and the practice of transcendental meditation).
The album is plaintive, mellow, raw and introspective and personal.  No doubt there is a healthy dollop of catharsis mixed in too.
Opening with the eerie, almost funereal sound of a simple piano, and then Smyths cracked voice appears almost pleading.
The production is never "busy" with minimalistic  instrumentation and arrangement throughout even with strings and choirs layed over some of the tracks.
The lyrics are raw and tinged with sadness, yet delivered in a conversational style.  There’s a darkness and melancholy, yet a certain affirmation and redemption too - the term “bitter sweet” is probably too simple a catch-all term.

It is an album that should be properly listened to, ideally in one sitting, probably accompanied by a beer or two and a few moments of personal reflection.
There’s a darkness and melancholy, rawness and sadness, yet a certain affirmation too (dare I say “bitter sweet”?).

In short, it is a truly great album, and (I feel) an incredibly brave undertaking, knowing Chas Smash of the past - the man is now grown up, grown wiser, comfortable with himself, and willing to share his experiences.  It is difficult to say “enjoying it” because I’m not sure that is what you do?

You're Not Alone
Posted by Rigid Digit at 20:43 No comments: