When a band has been doing the rounds for nigh on 40 years releases a new album, the obvious questions arise:

Yes, Yes and No (but also Yes (confusingly))

Over 38 years and 12 albums (including an 11 year hiatus) they've rarely released a duff album.  Even 1988s The Madness has (thanks to the distance of time and expectation) redeeming qualities. 1999s 'Wonderful' marked a return - it was good but sadly relied on point 3 above perhaps too much.
Scroll forward another 10 years, and the magnificent 'Liberty Of Norton Folgate' cemented their return, and at the same time their place as continuing that line of Great British Songwriters and Performers (I hesitate to say "National Treasures", but it does fit).
2012s 'Oui Oui, Si Si, Ja Ja, Da Da' was perhaps a slight wrong turning, but this new one is (in my mind) the de facto follow-up to Norton Folgate.

Right from the start, this is Madness doing what they do best.  Telling stories of life around them, their experiences (and imagined experiences) against a musical base of of Ska/Soul/Motown (with added Pub Rock and a whiff of the Fairground) against a backdrop of Ealing comedies, and a touch of darkness thrown in for good measure.  The plinky-plonk piano, greasy saxophone and urgency and sometimes over enunciated vocals are all present and correct.  Even when they make political comment (as they do on "Mumbo Jumbo") or consider Religion ("I Believe") it's still done with an uplifting beat.

There is a slight re-visit of the past on opener "Can't Touch Us Now" where the middle section is a slight re-visit of "Shut Up".  And from there on you know you are in comfortable territory.
"Mr Apples" and "Herbert" are story telling of the highest order, and "Blackbird" recounts a brief meeting with Amy Winehouse.
There is "Classic Madness" throughout the album particularly on the Western stylings of "Grand Slam" and "Don't Leave The Past Behind You" (this track is the most insistent and will be stuck in your brain for days).  There's even space for a ballad(?) in the shape of "You Are My Everything" - an almost spoken word statement of commitment that is neither soppy or sappy.
The past is (sort of) revisitied again with the doleful "Pam The Hawk" being a close cousin of "One Better Day".  This song could have just been mournful , but the lyrics and delivery ensure that is not the way - Yes, it is sorrowful, but not uncomfortable.
The closing track is a marvelous piece of nonsense called "Whistle In The Dark" which sounds like a left over, or forgotten track, from Norton Folgate.

The album was recorded live in an 8 Track studio - and they have made it clear that it was done the old fashioned way, with no ProTools or trickery going on.  And furthering the "analogue" nature (and because that's what everyone does now) the album is also available as a Vinyl edition.  And therein lies my only real complaint.  The CD has 16 tracks, the vinyl trims this to 12 losing "Another Version Of Me", "Don't Let Them Catch You Crying", "Given The Opportunity" and "Soul Denying".

There is plenty here that could comfortably sit in their live set alongside "Baggy Trousers", "One Step Beyond", "The Sun and The Rain" or "NW5".
This is Madness moving forward, but recognising what made them so long lived,  They have distilled their essence of the past 38 years into this album.  I admit that it's not their greatest offering (I think that honour falls to Norton Folgate or The Rise & Fall), but there is a craft and energy and honesty in this album that cannot be denied.  It deserves, and rewards, repeated listening.
Madness albums of old have a continuing lure that demands they be replayed, and this one is no different. 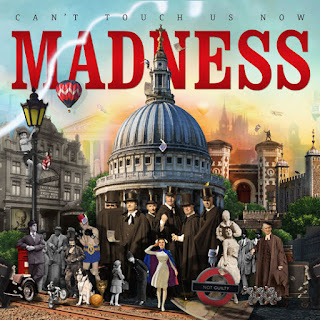