Yes, its that time of year again when everyone in the world tries to convince us of what the best slab of vinyl (or CD) released this year was.
Never one to buck a trend, or rock the boat, or even use well worn clichés, I'm going to do exactly that.

2014 has seem some superb releases, it started well, rose in Spring, tailed off a bit in the summer, and finished relatively quietly (or it did for me anyway - much like previous years I probably spent more time re-discovering old stuff, than buying new).  But here are the Top 10 choices that found their way onto the Rigid Digit Shelving Catalogue (organised in strict alphabetical order) this year:

1) Stiff Little Fingers - No Going Back
Be honest, did you really expect anything else?  SLF release a new album and Rigid Digit places it at Number 1.  Quelle surprise?
But wait, I am being objective about this (and even ignoring the fact that I helped part fund it (via PledgeMusic)), this album is right up there with anything they've released previously.  Yes, I have no doubts about placing it with 'Inflammable Material', 'Hanx' and 'Guitar and Drum'.
11 years after their last release, a sizeable chunk of water has passed under the bridge, but the subjects that fire Jake Burns pen are still about.  Political hypocrisy, Fat Cat Bankers and injustice all make an appearance.  As does the nagging doubt that despite the passage of time, nothing much has changed.
And it's not just me - Vive Le Rock agree

2) Len Price 3 - Nobody Knows
3 albums down, and on this fourth offering the boys from the Medway Delta are still pumped full of adrenaline, top quality riffage and tunes.  Continuing to evoke the spirit of 60s Mod and Garage Rock, but there is more to the band than The Who and The Kinks with a dollop of The Jam and The Clash thrown in.
This album starts on a high, and over 13 tracks of definite ear-worms, does not let up (OK, the mood/pace dips on a couple of tracks, but hey it can't all be 100% full on all the time).  These songs are potent enough on record - in a live setting they're even stronger.  If you insist on seeking out at least one track, do yourself a favour and hop over to YouTube and find "London Institute".

3) Henry Priestman - Last Mad Surge Of Youth
Having spent 30 years in the music business as a member of The Yachts, Its Immaterial, The Christians, and hired keyboard player and producer, Henry Priestman finally released his debut solo album at 53.  'Chronicles Of Modern Life'  has been described as "Music for grumpy old men".  6 years later, he has released the follow-up.  The prime difference here is the album is lighter on frustration, with an almost withering acceptance of the world and it's reality.  There are moments of real tenderness, moments of proper "jump up and down and punch the air", relection and continued frustration, all served up with a dollop of healthy self-deprecation.

4) Ben Watt - Hendra
Never really liked Everything But The Girl - all that sombre, downbeat, miserabalism just made me shout "Cheer up.  Smile, it may never happen" at the TV screen whenever they appeared.  But then, one day you hear something (in this case the track "Forget") which has a reminisence of EBTG, you find it who it is singing it, and your long held prejudices just melt away before your eyes.  Or maybe  thats just me ...
A melange of jazzy grooves, folk-tinges, electronica, indie guitar and an air of thoughfulness and depth in the songs.  Add it all together, and there ain't a bad track here.  One cannot escape the air of melancholy pervading the album, but it is not delivered in a dour tone.  Much like Henry Priestman (above) the songs deliver a "this is me, this is where I am, this is what is annoying me, now get on with it" tone.  A definite spring/summer album (and in this world of strange coincidence, one of the brightest, uplifting tracks on the album is called "Spring")

5) Wilko Johnson / Roger Daltrey - Going Back Home
Doctor Feelgood? Yes.  The Who? Yes.  But together, how does that work then?
The answer is damn near perfectly.  A mix of Wilko originals, old Dr Feelgood numbers and a Bob Dylan cover, Dalterys voice hasn't sounded this good on record for years, and Wilko is playing in his trademark rough edge style, and in sounding rude health (which he is now, having got the all clear in October).  This is hard, raw, rough & ready R&B, and you can almost feel the sweat coming out of the speakers.  The album finishes (in around 30 minutes), and you want to play it again ... and again.

6) Paul Heaton & Jacqui Abbott - What Have We Become

Cynical, surly, acerbic, full of wit - all terms that could be used to describe great wodges of The Beautiful Souths output, particularly the later Jacqui Abbott years.  There was something about the singing banter, and the blend of the voices of Paul Heaton and Jacqui Abbott which was almost perfect - prime pop nuggets with an edge, and an ever-present undercurrent of subversion.
This re-union picks up where the past left off, and it is fair to say the album possibly even surpasses their original incarnation.
Reading in places like a State Of The Nation address, there is joyous country/folk inflected pop, with an air of melancholy, frustration and acceptance.

7) Temples - Sun Structures
It is probably a 50/50 chance of a band debut release (or releases) resulting in a corking debut album (OK, the chances are probably greater (maybe 70/30), but I've got to make my point somehow).
Late 2012 saw the release of "Shelter Song" - a song mixing circa 1967/68 Beatles, particularly Ringo's drum sound, The Byrds, Syd Barrett and a whole load of reverb.  In short, a great slab of psychadelia for the 21st Century.  A second single appeared ("Colours To Life") in June that year, which (for me) just increased the anticipation for an album to be released.  And when it did hit the shelves, there was not an ounce of disappointment in my lug-holes.
From the opening track ("Shelter Song") to the clos, this album is a magnificent piece of work.  Dense, deep, almost claustrophobic in places - almost like the late 60s have been transplanted to 2014.  My only criticism would be that the epic penultimate track "Sand Dance" would be a better closing to the album than the more acoustic, wistful "Fragments Light" (but thats just my opinion)

8) Manic Street Preachers - Futurology
If Simple Minds had recorded at Hansa, this may well have been the result.
(Lazy and simplistic, I know - but it is the easiest way to describe this release)
A definite European feel, leaving behind the more home-spun Welshness of Rewind The Film.
Each album since 'Send Away The Tigers' has been getting better and stronger.  This album continues that run, and develops/enhances (?) the musical template of previous releases, but does not sound out of place in the Manics catalogue.

9) Real Estate - Atlas
2014 Correction of Prejudices Part 2 - I never really like all those American indie bands.  Sometimes trying to be too "muso", or being too Americana-centric (is that a term? it is now.  I know what I mean by it anyway).
This album showed you can still have all the above, and these cloth ears will respond - I don't know what Real Estate have done that is any different to any of their contemporaries, but they've done something.


Special 2014 Bonus selection (because I can't yet make a case to squeeze it into the Top 10 (what would I leave out if I did?))

11) U2 - Songs Of Innocence
If we ignore the hoo-har about the release through iTunes, and the album becoming simataneously the most downloaded, and the most deleted album ever, this is a great album.  U2 are not trying to preach, or to push the boundaries of their sound, or indeed to anything "big and clever".  It's like 'Rattle & Hum' without the trying to hard to be "rootsy, americana-esque, ans self-important.  The opening track "The Miracle Of Joey Ramone" is surely deserving of a nomination for 'Best Opening Track' accolade.


On the whole, 2014 has not been a bad musical year.  In addition to the 11 above, my earholes have been digesting new discoveries, and/or catching up with those that I missed out earlier, in the shape of: 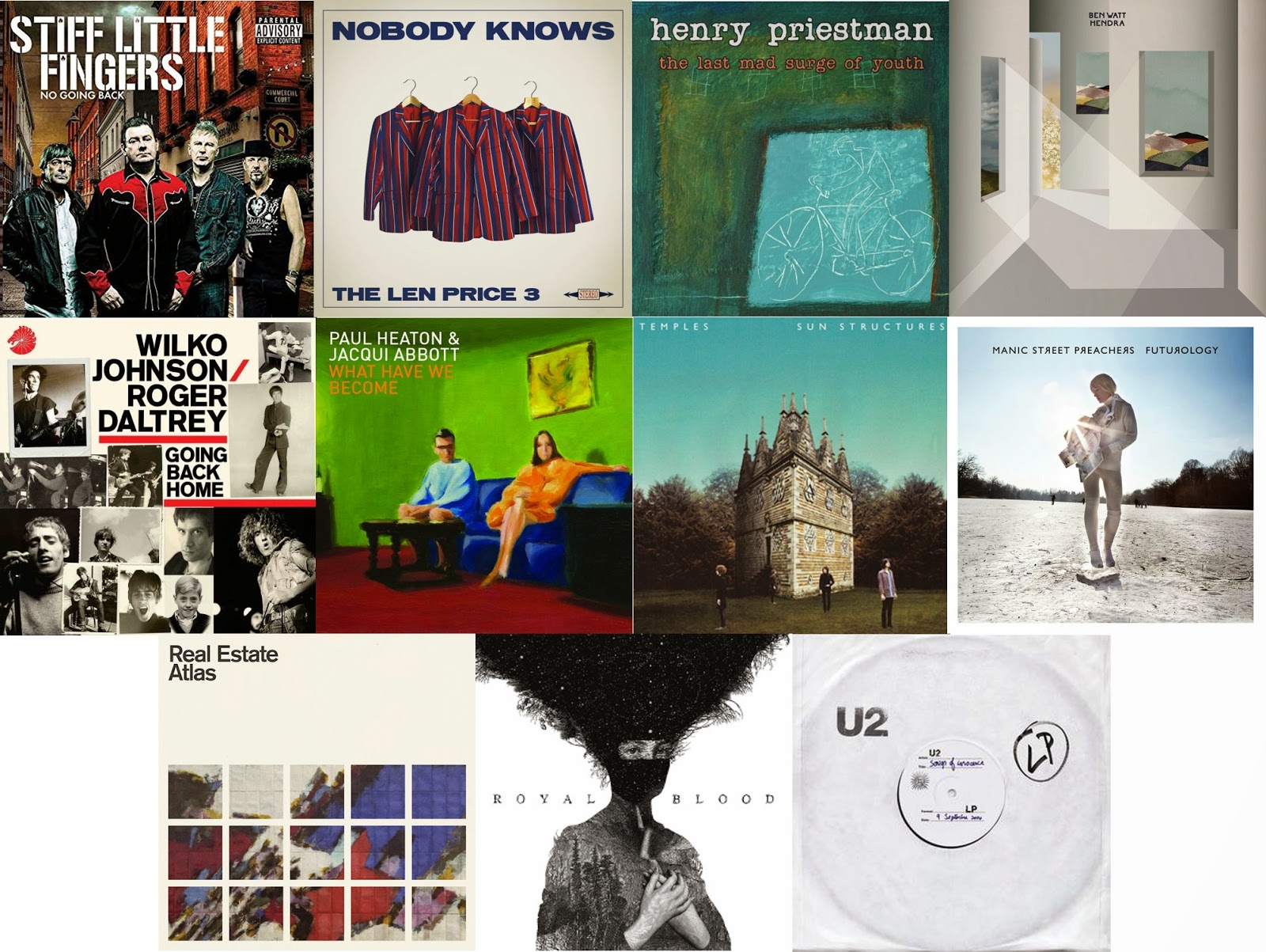