The letters X, Y and Z offer slim pickings, and I make no promises for the discovery and re-appraisal of long forgotten gems.  Indeed, the random-ness of these selections may not appear all that random and you lot will be thinking "ah, he's just chosen something comfy that he knows".
Well, honestly - the randomisation may be minimal but it is still Excel's choice and not mine.

This was the debut (and only) album by one of the early wave of Punk bands (inspired by Sex Pistols, and played The Roxy - credentials for an "original punk band" me suggests?).
X Ray Spex had two stand-out elements that differentiated them from the Punk pack.
Their first single ("Oh Bondage Up Yours" - the only recording with Lora Logic, before she left and went back to school) came in late 1977, with this album following a year later.

The album can be read as an onslaught against consumerism, fakery and gender politics (no getting away from that one - Poly is a forceful character, and you just somehow "believe" it is there).
On first listen, it's difficult to get past the punk-thrash, atonal high pitched vocal and seemingly out of place saxophone.
Further listens reveal it to be something of a statement.  And titles such as "The Day The World Turned Dy Glo" do resonate - this album does indeed feel alive, colourful and joyous in delivery, if lyrically it may take a darker or more contemplative tone.
The stand out tracks for this listener are the title track "Germ Free Adolescents" (which has a slower pace than the rest of the album, but is no less engaging), "Identity" (a mainstay of multiple "Best Of Punk" compilations) and the almost 60s Girl Group meets New Wave sounding "I Can't Do Anything".

Their star rose and descended quickly - by early 1979, Poly Styrene was showing signs of mentally exhaustion, wrongly diagnosed with scizophrenia and sectioned.  This spelt the end of the band and they chose not to continue.
Poly later became involved in Hare Krishna movement, and made intermittent public appearances thereafter.
As one of the few women involved at the outset of Punk, she will be remembered as a trailblazer of sorts.
Her "legend" will always be this debut album - she was one of the first female punks, not scared of herself or anyone else, and (fearfully treading into cliché territory) a true original.
Sadly, Marianne Elliot (aka Poly Styrene) passed away in 2011. 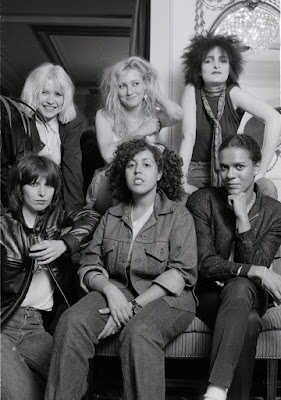 I Can't Do Anything

Not too much has come out of Tamworth - Sir Robert Peel and Julian Cope perhaps being the most noteworthy.
But it was home to one of the first British Heavy Metal bands to be signed to Rick Rubin's Def American label.  He was also producer of this - their debut album.

The sub-title of the album should give a bit of a clue to the content:
Wicked Tales of Booze, Birds and Bad Language

The album itself is pretty formulaic - sort of Iron Maiden meets AC/DC with a bit of David Lee Roth thrown in for good measure.  And the Rick Rubin production is not a great one - it all sounds a bit flat, the edges smoothed and never really shines or grabs the listeners attention.
I'd like to say "ah - but this doesn't matter because the songs are top notch".
Unfortunately, I can't say this because the album has a couple of high points and then seems to be fleshed out with filler, guitar trickery (wankery?) and thumping drums.
Give Blaze Bayley credit though - the vocals are really quite good, and one can understand how the man got the job of filling Bruce Dickinson's shoes in Iron Maiden (sadly, despite a couple of good songs, the Maiden albums he was involved with are a bit "treading water").

But back to Wolfsbane ...

The album kicks off with an sonic assault in the shape of "Man Hunt" - maybe not big on the lyrical front, but a late 80s Metal track favoured at parties and alternative nightclubs (I know this because I played it a couple of times to positive reaction).
But following songs barely break away from the template and just all sound a bit predictable.  The two other beast tracks are "All Or Nothing" (not the Small Faces song), and (almost obligatory) Rock/Metal Ballad (think Bad Company meets Dogs D'Amour) in the shape of "Tears From A Fool".

12 tracks - 3 pass muster, and the other 9 are somewhat disposable (to my ears) - I wouldn't necessarily seek this album out again (maybe I've heard it too much in my younger years), but by the same token I wouldn't turn it off if it popped up on random play.