Was the colloquial name given to the 1970s Motor Industry aberration that was the Austin Allegro.
Launched in 1973 as the replacement for the huge selling and extremely popular Austin 1100, it did contain many radical ideas & innovations, such as Hydragas suspension and the (infamous) Quartic steering wheel (ie square, with rounded corners).
Available as 3 engine sizes and 5 body variants (personally, I always thought the estate looked pretty damn good)
I never owned an Allegro, but I have driven one.  Despite being seriously underpowered, the ride was not offensive and the Quartic steering wheel felt no different to any other.

One of the available body variants was badged as the Vanden Plas version.  Basically, a 1500 Allegro saloon decked out in leather and walnut with a stonking great front grill. 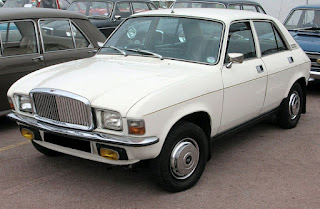 When I saw one of these driving towards me the other day, it put me right of my breakfast.  The Allegro shape was never the most attractive, and in Vanden Plas clothing it just looks weird! (huge front grill, skinny tyres, dodgy 1970s hub caps with the VP logo).  I also had to cover the eyes of the wife & children for fear of scarring them for life.

The sister car of the Allegro was the Morris Marina - a car of so little charisma that apart from an appearance in Life On Mars, they are rarely seen anywhere (or if they are seen, no-one remembers seeing it anyway).
When the Marina was to be given a facelift in 1980, the job was given to the Italian design house ItalDesign.  And so proud they were of what they had done, it was promptly written out of all their history books.

Now the 1970s are back in fashion, albeit in an "ironic" sort of way *, doubtless cars such as the Allegro, Marina, Vauxhall Viva and other vehicles built down to a cost by striking unions, will start to appear on our roads once again.
One thing is for sure, the Vanden Plas Allegro will once again scare children who come into contact with one - a bit like an automotive Medusa

Things change.  Attitudes to stuff changes.
It's only when you stop and take stock that you realise.

Previously I mentioned my new car purchase (its a Jaaag (which must be said in a Terry-Thomas/Leslie Phillips type voice)).
I owned my previous car for just over 6 years.  In all that time, I don't think it was ever touched by a sponge.  The only time it got any water on it was when it rained.
I've had the new car for just over 4 weeks now and I have washed it twice already.

In recent weeks I have noticed that I have now shunned the T-Shirt & Jeans combination in favour of the shirt.  A proper long sleeved button up shirt.  They just seem more comfortable.  In fact, I would say that I have a favourite shirt (not really, I just wanted to slip the song title in)

In addition to this change of top covering, I had cause to buy a new pair of boots.  The old ones were somewhat past their best - the sole had all but come clean off on one boot, and the other had more holes in it than a northern town who have just been relegated from the Premier League.
A visit to the local footwear emporium was necessary.  I visited Brantanamo Bay (or Brantano as it is actually called, which is exactly the same a Guantanamo Bay except no-one is wearing an orange boilersuit and the place is full of shoes) and selected a new pair of boots.
I now have a pair of Chelsea Boots as my "not at work" footwear, and very comfy they are too.

And then this morning I noticed a slight problem - I woke up to let the dogs out for their morning business.  I threw on a pair of tracksuit bottoms and the aforementioned favourite shirt.  I then slipped on my new boots to accompany the mutts outside.
Did I look like a prime pillock or what?  The Chelsea Boot/Jogging Pants ensemble is a tough one to pull off, and I don't think I managed it.
Oh well, might have to invest in a pair of slippers - or is that a step too far?

Carter USM - Surfin USM
Memories of "dancing" (more like jumping around like a complete loony) to this album, whilst wearing T-Shirt, Jeans and the omnipresent leather jacket with Motorhead & Iron Maiden logos on the back (no idea where that has gone - must have a look in the loft).
This track has a resonance due to the spoken introduction (lifted from an episode of Red Dwarf (Body Swap)) - painfully accurate, and sadly quite true

One and a half Albums, plus some other tracks

That is my brief summary of The Stereophonics.
Unfair? Possibly, but bear with me.

Thumping drums, turned up loud and noisy guitar, and a vocal style reminiscent of Jake Burns from Stiff Little Fingers (ie 20 Marlboro and gargling broken glass before going on stage) - what's not to like?
Absolutely nothing I thought as I pushed the first album ("Word Gets Around") into the CD Player.
At the end of it, there is still nothing missing and this is a band I intend to follow.

The second album ("Performance & Cocktails") is released (preceded by the single 'The Bartender & The Thief' (more of which later), and its more of the same but now with added shine.
But for me, it all gets a bit wearing about halfway through the album.

Subsequent albums were purchased more out of a sense of loyalty than actually being excited by the new release.
"Just Enough Education To Perform" was the sound of the band losing direction.  'Mr Writer' is OK, but not exactly earth shattering, whilst the album just feels like an attempt to write anthems for the US stadium crowds (prime example: 'Have A Nice Day' - destined to be heard on any TV Programme where a feeling of happiness is wanted to be conveyed (expect to hear it A LOT in the forthcoming Jubilee & Olympic months)).

If their cover 'Handbags & Gladrags' was appended to the next album ("You Gotta Go There to Come Back") it would make it a touch more palatable.  "Maybe Tomorrow" is the best track by a long way on this album.  As it is, I think I've only listened to it three times (the second and third times to make sure I'd not missed anything.  I hadn't - I still thought it was an awful album)

"Language. Sex. Violence. Other?" is another mish mash of patchiness.  "Dakota" sticks out a mile in amongst the dross.  In fact, I feel confident in saying the song is one of their best.

"Pull The Pin" is another which has had no more than two listens.  "Pass The Buck" and "Bank Holiday Monday" are listenable, but the album is ultimately disposable and not really necessary.

And so the last album (so far?) - "Keep Calm and Carry On" is not actually that bad, its certainly a lot more "listen again-able" than the previous three.

So there it is - the story of a band with great potential, but failed to fulfill their promise (at least in my eyes anyway).

I could've chosen any track from the first album to illustrate how good The Stereophonics could've been.
But I will choose 'The Bartender & The Thief'.
this track became a thing of legend when it soundtracked a very drunken Air Guitar competition on New Years Eve.  It proved so popular, it was repeated the following New Years Eve and (embarrassingly) videoed and played back when moments of shaming are called for.

Life is all about experience and learning.
Three things I learnt on my recent holiday:

Wetherspoons
The pub chain has always, in my eyes, been firmly placed under the "Cheap & Cheerful" banner.  Previous experience suggests the banner should read just "Cheap".
The pub closest to where we were staying was big on Carvery, but the Beer and other food available left a bit to be desired.  Having wandered around the town and not really been inspired by any pub/restaurant seen, Wetherspoons was viewed as the last resort.
It was Thursday, so that meant Curry Club - a Curry, Side Dishes and a Pint for less than 8 quid.
And do you know what?  The Beer was great and the Curry even better (so much better than the ropey takeaway we'd has the previous Saturday).
In fact we were so impressed, we went back the day after to check this wasn't some sort of Dorset Mirage. More tasty Beer and well prepared, tasty food.
Now comes the crunch - is this just the Wetherspoons in Dorchester, and will the experience be repeated in the hostelries in Reading?

Chris Evans
'It's Not What You Think' - the first part (up to the takeover of Virgin Radio) of his autobiography was the chosen Holiday Read.
Much like the Wetherspoons experience above, I wasn't expecting that much from this book.  I've never been a big fan of Chris Evans, and always found his seemingly forced zaniness a bit annoying.  Add to that the rampant ego-mania that was apparent throughout the Radio 1/TFI Friday/Virgin Radio/Billie Piper years and the public face of the man became a bit tiresome.
His autobiography deals honestly and openly with all the events leading up to this point, and he comes across as a very sincere and driven man.  The main point that can be drawn from the book is:

If you want something bad enough, and are prepared to put in the hard work to achieve it - you will be rewarded.

Chris Evans has now been added to the list of "People I Would Like To Have A Pint With" (I'm sure everyone has got one of those lists.  No? Maybe it's just me then)

Lunchtime Drinking
I've never been the greatest lunchtime drinker.  The problem I always had was stopping.  Couple of Pints at lunchtime, stop drinking leads to falling asleep in the afternoon and ruining any decent evening.
But now lunchtime drinking has the added affect of completely killing off any semblance of appetite for the rest of the day, hence leaving me bloated, tired and VERY grumpy.
OK I admit it, at the age of 42 I can no longer manage this and will henceforth not be imbibing alcoholic beverages before 7:00pm.


Other abiding thoughts/memories from Holiday.
Our youngest dog is a right pain in the hole and will bark at anything that moves.  Oh well, a bit more training required.

Oh the excitement that is the weekend.
Having had a big clear up of all the collected chaff and rubbish that has accumulated chez Digit, there were no discoveries of long lost jewels, expensive watches or antiques of any kind.
So what is to be the family legacy? the heirloom that will be passed on from generation to generation?

This is the best I can offer my future family tree:

My mate claims to have a Louis XV ashtray, so if that is true (and I have no reason to doubt it), then I will bequeath this relatively sought after Art Deco Pizza Cutter.

Roll on the day Antiques Roadshow visits my hometown.
Posted by Rigid Digit at 20:19 No comments: