I recently did another of those Facebook challenges
This was the challenge:

What no explanations?  That's OK, I'll just use my other presence on the interweb (ie here) to do the explaining (because I think I should).
And I've changed the posting order to try and create a chronological flow to my listening habits 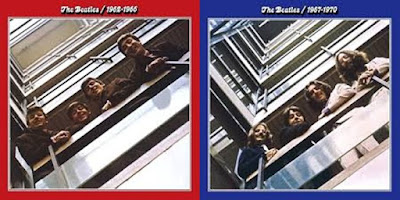 This is a double album (quadruple album?) really.
Introduced via nicking the Red one it out of my parents record cupboard, and playing it to death.  The Blue album arrived a couple of years later.  And that one got just as much record player time
Still today, if you want a hit of those Beatle-y blokes, these 2 are the perfect entry point.
And one still marvels at how far they'd travelled in 8 short years.
It's basically the singles, plus choice album tracks (but not always the best album tracks from their parent albums) - and it's always surprising just how many great were left off. 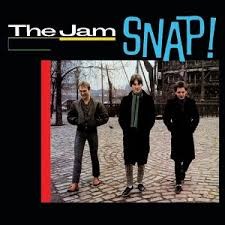 The Jam split in 1982 - being 12 I owned a few of their singles, but surviving on a paper boys wages (I'd just got my first paper round), albums generally remained out of reach (unless it was a birthday or Christmas).
When this arrived in early 1983, it rounded up the singles, many B-sides and some album tracks (like the Red and Blue albums above).  Plus and added bonus - the inner sleeve contained extracts from Paolo Hewitt's A Beat Concerto book.  I read this, learnt it, bought the book, and became a Jam expert by the end of 1983. 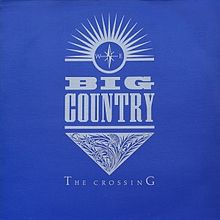 I heard "Fields Of Fire" on Top Of The Pops, and it was one of those moments where everything stops and concentration is focused in only one direction.
The album did not disappoint.  I went forwards with Big Country, and backwards to The Skids - I'm happy to say I own just about everything commercially released by Stuart Adamson's bands (and a couple of bootlegs).  The 16th of December is still marked by the wearing of a tartan shirt. 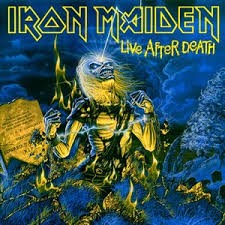 Albums were out of reach in early teenage years (see above), but I did get a copy of Iron Maiden's 'Number Of The Beast' in early 1982.
I'm a Heavy Metal Mod with a major appreciation of The Beatles - jeez, I was confused.
This Live album arrived in 1985, and my listening habits changed again (as did my attire and hair length) 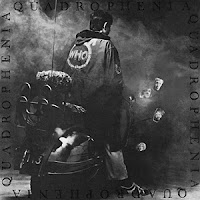 Which came first - the album or the film?
The album (obviously), but in my world I'd seen the film first, and I very quickly wanted to get hold of the album.
One problem: it was either nowhere to be found in Our Price, or hellishly expensive.
Solution: "Hello mate.  You like The Who, can you record that Quadrophenia album for me.  Here's a TDK D90".
I played it so much I wore the tape out 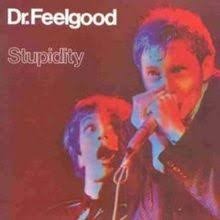 The same person who gave me 'Quadrophenia' also supplied (of his own volition) a tape copy of this 1976 live album (recorded in Mono, trivia fans).
The sheer energy (and danger) of the performance remains a yard-stick for how I want a sweaty live show to be. 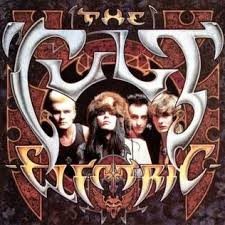 Being 7 doesn't really get you entry to Punk - however, 10 years later I was bitten by the music (and the attitude).  I can keep doing the Heavy Metal Mod thing (with a bit of Goth thrown in), but now I can revel in the joy of amphetamine-fueled high energy noise.
In truth, it was a compilation called 'Burning Ambitions' that was my entry to Punk, but this album surely defines my listening. 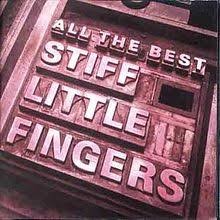 I want to own as much Punk music as possible, and a compilation called 'The Vinyl Alternative' presented a band that sounded as urgent, tuneful and aware as any I'd found (plus that rasping vocal sold it again).
On the strength of one track ("At The Edge") I bought this singles collection, played it once, and the S section of my vinyl collection expanded rapidly.
My absolute favourite band of all time.  I own everything they've released, a fair amount of stuff they haven't (officially) released, see them at least once a year, and even use their record label name to hide behind when writing stuff here, there and everywhere. 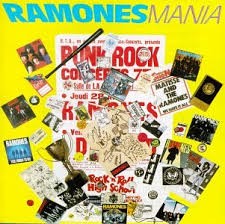 When you've exhausted UK Punk, where do you go?  US Punk obviously - although tread carefully, not all of it is great.  But this lot are one of the original influences on the UK Punk scene - their debut album is an artefact of great significance, and their Roundhouse and Dingwalls shows in July 1976 were attended by just about anyone who had anything to do with the original UK Punk movement.
Surf music, bubble-gum, and buzzsaw guitar, all topped off with a fantastic vocal (one of the greatest rock vocalists ever?).  What more do these ears want.
I can even forgive the non-chronological running order - this album is that good and that important.


But wait - that only takes me to about 1988/89?
My Vinyl Era runs from the ages of 12 to 19 - after then, purchasing was a mixture of both Vinyl and CD.  Also, I was now working full-time and had disposable income.  Even more albums would be purchased, but maybe the deep influence, or seismic changes didn't occur as often.
Yes, there were moments where listening habits were broadened (rather than changed) - Richard & Linda Thompson's 'I Want To See The Bright Lights Tonight' for example - or reinforcing habits like the first Oasis album.
They may cause similar flurries of excitement, enjoyment and expenditure, but do they have the same "influence" as those first heard moments by a moody teenager with bad hair?
Posted by Rigid Digit at 20:28