Duncan Reid's first musical outings was with Punk/Powerpop band The Boys in 1977.

The Boys came together from members of the mythical London SS, The Hollywood Brats (sort of like a London equivalent of the New York Dolls), and a couple of mates from a T-Shirt factory.
Signing with Nems Records in 1977 meant, for a brief time, they weer the only Punk Band in the UK with a major label deal (if you consider Nems to be a major label?).
A share of the vocals on their first album were handled by bass player (and ex T-Shirt worker) Kid Reid.  He also provided the voice for their second single "First Time", which to my ears is one of the greatest Powerpop songs to emerge from the period.
The Boys career resulted in 4 albums on 2 different labels, 8 singles, a Christmas Album (under the name The Yobs), and little success.  They called it a day in 1982.

But, when you've toured and been on stage with The Ramones, the "feeling" probably never leaves.  And so, nigh on 30 years later Duncan Reid started his solo career.
The debut album - 'Little Big Head' - arrived in 2012, followed by (the knowingly titled) 'The Difficult Second Album' in 2014.  The sound wasn't too far removed from the powerpop template of The Boys, and the band (The Big Heads) the perfect foil to Duncan's songs, observations, and vocals.
Live, Duncan Reid & The Big Heads are a sight to behold - a real entertaining and committed spectacle.  Unfortunately, they are often found on the smaller stages and venues than perhaps their capabilities deserve.
2016's 'Bombs Away' was another fine blast, and ranks as my favourite of their output - until this fourth album arrived.

The album flies into opener "Your Future Ex-Wife" setting the ground for what's to come - high energy guitar and drums, almost vulnerable sounding vocals - and a catchiness that is on the verge of taking root in your ears and staying there.
Despite it's elegant intro, track 2 may not garner much radio play with a title like "Motherfucker".  But you know that "catchiness" thing I mentioned - I found myself singing this to myself in the queue at the Co-Op (I did try to keep the chorus quiet for fear of dis-approving looks from my fellow queuees.
And the pummeling continues - "Welcome To My World" - lyrically Duncan's world is "mildly absurd".  And that's the sort of world I enjoy.
"Tea and Sympathy" almost starts in Prog Rock territory before settling back in a laid-back groove. If it was up to me (which it isn't) I'd swap the sequence with "To Live Or Live Not" (another fine slab of power) .  I just think it would flow better to the similarly Prog afflicted "The Grim Reaper", complete with Supertramp-esque vocals and ELO harmonies.
And there nestling in the middle is my choice cut of the album - "For All We Know".  The catchiness quotient is upped again, and the band's sound fattened with washes of keyboard.
"Oh What A Lovely Day" shows the quieter, more reflective Duncan, and bolted to a repeating chorus that will return to you in moments of wistfulness.
"Ballad Of A Big Head" sticks to the template (good thing too - I'm not bored of it yet) - and this one has a guitar break, with an organ break competing over the top.  It just goes up another notch as a result.
Title track "Don't Blame Yourself" adopts/adapts the T.Rex "Get It On" riff ("adapts", not copies) and is delivered in a lower toned vocal, with added backing vocals in harmony.  This band is on fire at this stage, and there's still 4 more tracks to go.
"Came The Day" returns to the more wistful mode - it's almost a 60s doo-wop (ish) throwback, and gives that little breather before "Little Miss Understood" flies out of your speakers.  This is one that I would like to see live - the solid drums, the guitar melody playing, and that almost anthemic shout along lyric/chorus.
I'll be honest here - I'm not sure about "Dave".  Who writes a song about a TV channel?  Oh, they haven't.  It's a bright sounding stomper with some nice piano interludes.  Another breathing opportunity before closer "Jealousy".  This song takes all the previous elements of this album and combines them all in one song.  It all finishes on a high.
It's finished, and now I'm going to play it again.

Nothing up on YouTube yet, but here's the Spotify link (if it works?)
Can I draw you attention to track 7 "For All We Know" - I don't think you'll be disappointed 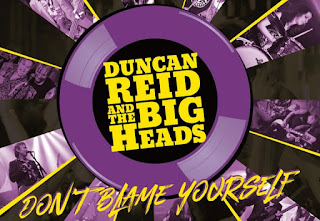