No ... not those type of Magazines.
And not a celebration of Graham Coxon's 2004 album either (although it is very good).

As more and more content goes on-line, and advertising is becoming both less bountiful, and filling large amounts of space in each copy of Mojo that flops onto my doormat, one can't help but feel that the life of the essential reading Magazine may well be up soon.

I hope not - there are still stories to tell, new angles to look at, and gaps in the knowledge to fill.  And why not through the pages of a handy, digestable and portable medium.  Plus, for me, there is something of a ritual involved - Saturday morning, cup of coffee, couple of fags, and leaf through whichever of the couple of Magazines occupy the coffee table.

There is a very real chance that the interweb has reduced my (and doubtless many others) Magazine purchasing, so what follows is a musing of my purchasing history of the glossy and not so glossy A4 size journals.

Of course it was all comics when I were a lad - The Beano, The Dandy, Topper, Whizzer & Chips.  They all passed through my hands at some point, but I don't ever recall regularly getting my own copy.
The fist comic I can recall getting with any regularity was Tiger and Scorcher - the adventures of Billy's Boots, Hot Shot Hamish, Nipper, Skid Solo, and Wrestler Johnny Cougar remain in moments of
Whilst Tiger and Scorcher tried to cover the sport spectrum, Football won out, and soon Roy Of The Rovers became my weekly fiction of choice, and in a neat re-visit when Tiger comic folded in 1981/82, a lot of the Football strips transferred to Roy.
And - as I've discovered on-line, Roy is still overseeing the dominance of Melchester Rovers serving as Manager, Chairman, Sponsor - and probably Coach Driver, Tea Lady, and Raffle Ticket Seller.

But Comics are for kids - it was time to grow up and move into the world of glossy magazines.
Football still very much the obsession, and Shoot was my first port of call.  And it's many posters adorned this Football fans bedroom wall.
The big attraction of Shoot was, just before the start of the season, it gave away the League Ladders - a mass of cardboard with little T-Shaped pieces representing each Team that you placed in the spot in their division.  Many a Sunday morning spent re-arranging bits of cardboard to match the listing in the newspaper.  And then the mid-week games happened and mucked it all up.  Did anyone keep a League Ladder going after about November?
Shoot remained constant, sometimes supplemented with the odd edition of Match or maybe Scoop for a wider sporting view.

And then the Music gates opened.
So in early 1983, there was only on Pop Music mag in the game - Smash Hits.  But by the late spring of that year, Number One arrived to give it some competition.  Plus the first couple of issues contained extracts from The Story Of The Jam (A Beat Concerto) - my pocket money went into Number One's coffers.
For a while it did give Smash Hits a run for it's readership, whilst covering sometimes more left-field bands than the shiny pop or burgeoning Duran vs Spandau face-off (not quite Beatles vs Stones, but the best you could get in the 80s).  But at some point my loyalties returned to Smash Hits - I don't know if a 14 year old can make an informed decision on editorial content, but that is probably what happened.

And then comes the point when the world of Pop starts to funnel tribally to specific genres.  I went for the noisy guitar based stuff, and my next port of call was Sounds and/or New Musical Express, plus the odd copy of Melody Maker for completeness.  And to widen the genres further, Kerrang was also on the shopping list.
And now I've got spare cash and no responsibilities, let's add Metal Hammer, Raw, Record Collector, Spiral Scratch, Classic Car, Practical Classics and Street Machine to the basket.

And not forgetting the return of the Comics - albeit in a more grown-up (apparently!) form in the shape of Viz, Zit, Smut, Oink, and a fair few other trashy, puerile, sometimes vulgar, Viz knock-offs.

Viz stays with a man - I'm 50 years old and have just bought a new copy of Roger Mellie's Profanisaurus, call my dog Johnny Fartpants whenever he breaks the silence, and get a daily feed of Viz Top Tips on Facebook.   And every time I hear "Midnight Train To Georgia", I just see this in my head: 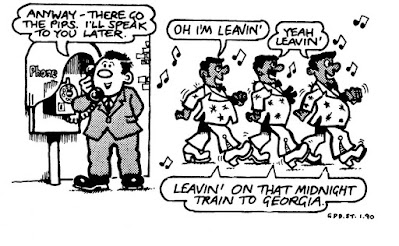 They also made an attempt at pop stardom with the release of the single "Bags Of Fun With Buster" by Johnny Japes and His Jesticles
(or as they are known in normal life: Andy Partridge and Dave Gregory of XTC, record producer Neville Farmer, and John Otway)

Sometime in the late 80s, Smash Hits grew up and spawned Q - a glossy monthly magazine focussing on the album, looking fprwards and backwards.  There weren't too many music publications talking about The Beatles, The Stones, Bob Dylan, Neil Young et al, which I think drove a difference, and possibly gave rise to the Heritage market today.  It may not have bee solely responsible, but Q and it's brethren have probably extended the lives of many performers beyond their allotted 15 minutes (or 5 to 7 years is probably a better life span estimate for mos bands).
Combining the irreverence of Smash Hits with informed opinion and thought, Q was the leader in a field of one.  It spotted a gap in the market that was only just opening where those in their 20s and 30s (and older) were now re-buying the music of their youth on a new fangled format (the CD) - the £50 Bloke started here, and were provided with quality writing and a certain depth of focus to an essentially (and certainly previously believed to be) disposable art form.

But by mid-1990 Q no longer had the market place to itself - Select and Vox launched within a couple of months of each other providing the same focus and writing but focussing on the nearer past and the more immediate future (Select have been latterly honoured with coining the term "Britpop").
Select and Vox trod similar ground, but were staunchly independent of each other.  It was a bit like a glossy mag version of the Melody Maker vs NME inky stand-offs in the 1970s (which is kind of apt an ironic as Vox was billed as the sister magazine of the NME).

All of those were regular purchases too - sometimes separately, sometimes all 3 in the same month (interesting to see the differences of opinion in the Album Reviews section - a 5 Star album in Q may only garner 3 Stars in Vox).

By 1993, Q knew it had competition so hived off the heritage element to the newly launched Mojo and focussed on the now.  Actually, this was to Q's detriment as it never felt quite as essential - the loss of Mark Ellen and David Hepworth probably didn't help either.
I bought Mojo too (often instead of Q, Select, and Vox - the latter too running out of time, readership and advertising as the new millenium dawned).

But ... it was not all music.  Football made a comeback to my reading materials.
Sometime between the 1990 World Cup and the launch of the Premier League in 1992, Football was throwing off it's hooligan image and attracting more attention again.  This resulted in the launch of 90 Minutes (a sort of Shoot for the 90s) which no doubt picked up adult readership of those missing the Shoot glory days (yes, that would be me).  And it did it's own version of the League Ladders.
And then, in the market of Mens Lifestyle Magazine (CQ, FHM, etc) came a big glossy, articulate and intelligent Football publication Four Four Two.

By 1995 Mojo had some competition (which survives to this day) in the shape of Uncut.  They both cover similar ground, but I have always found Uncut heavier on the Americana and heavier on the reviews.  That said, Uncut's review section gives more space to books, DVDs and Films than Mojo.  But again, there's only so much one can review and it's often worth looking at the differences of opinion.  I may be keeping the magazine world afloat (or at least playing my part) as not only am I a Mojo subscriber, but will also buy many copies of Uncut if the content appeals (and it often does).

The aforementioned Ellen and Hepworth departed Mojo left the world of Mojo (and publishing company EMAP) behind in the early 21st Century to launch a similar publication, but with a slightly more cerebral (or so I though) and eclectic bent in the shape of The Word.
A small, but perfectly formed periodical with similar qualities to early Q, the informative look at history of Mojo, the irrevernce of their Smash Hits days, with a little bit of fanzine thrown in.  Being staunchly independent (at least in the early days) meant they were not behoven to record companies or other media outlets, and could basically gush or diss product as they wished.
And like Q, The Word also fell at the right time for new technology with the advent of the iPod (although I think the next delivery format - streaming - was effectively their undoing.
And the small but perfectly formed nature of the mag extended to it's readership when an on-line blog/forum was created which attracted a number of readers and subscribers.  Some of the blog content even made it into the mag itself, and the Forum Community assembled itself into local groups organising meet ups and events.  Some of the contributors even get a mention in Mark Ellen's autobiography.
The Blog Forum survives to this day (despite there being no magazine anymore) in the shape of The Afterword, and it really is one of the nicest places on the internet to waste time.

But a relatively low readership, reducing advertising income, and more publications going on-line led to the demise of The Word, and I found myself initially subscribing to Q, which was soon replaced by Mojo.

But if proof were needed of independence and low readership leading to survival in the magazine world, look no further than Vive Le Rock - running since 2011 and surviving on a readership of around 15,000 this one fills the gap for Punk and New Wave that Mojo does not touch.

I'm not a fool (well, not much of one anyway) - I'm pretty sure the magazine market will dwindle and more will go on-line.  Mojo for example are already asking questions about their monthly free CD (possibly in an effort to reduce costs if the CD is not the biggest attraction of the magazine), but without magazines leading me down certain paths (and latterly Radio 6) I'm not sure I would've discovered as much new music as is accumulating on my shelves.

The magazine - a supplement to knowledge and opinion from a trusted source (unlike Facebook for example) - and/or a diversion from the sh*t of the real world.

And the Graham Coxon album? Oh go on then.  If you insist ... 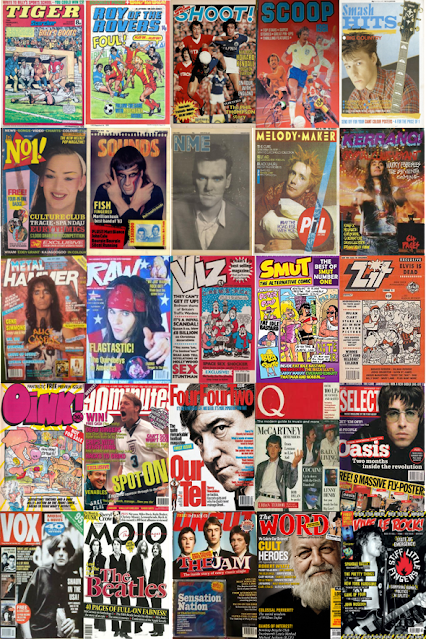