The Who Sell Out - Deluxe Edition

The Who’s 1967 album is given the Super Deluxe enormobox treatment. And there is a lot to get through.

If you are new to this album, this 80 quid box is unlikely to be your starting point, so the assumption is that buyers of this will already be familiar with the album content.

It’s been suggested that Sell Out was an early concept album. Not convinced – there is no narrative, no story thread linking the songs, and no conclusion. What it is is a collection of great songs linked by jingles and adverts. It is more an attempt to celebrate (or perhaps re-create) the experience of listening to Pirate Radio.
The original plan was to sell the space between tracks for real adverts – when this idea didn’t fly, the band created and recorded their own (many of them created by John Entwhistle and Keith Moon in the Pub round the corner from the Studio).

The 13 tracks that make up the original album are a mix of psychedelia, tough-egded pop, and with “I Can See For Miles” a rock edge that would become The Who’s trademark.
Like previous outing ‘A Quick One … While He’s Away’, the album is rounded out with a Pete Townshend mini-opera (“Rael”) – another exercise in Pete stretching himself by taking fragments of ideas and songs and weaving them together into one whole, and yes I think he succeeds. Whatever, it is certainly good practice for (what we now know) was coming next.

This box gives 112 tracks across 5 CDs and 2 additional 7” singles.
You get both the mono and stereo mixes of the album stuffed in this box, plus a host of extra tracks – some have appeared before in the guise of the Maximum R n B Box Set, Odds and Sods compilation, or bonus tracks on previous re-issues, but many are seeing light for the first time.
Also included as bonus tracks of the mono and stereo albums are the contemporary singles “Pictures Of Lily” / “Doctor Doctor”, “The Last Time / “Under My Thumb”, a host of unused advert jingles, and a Who’d up version of Grieg’s “Hall of The Mountain King”

But that’s not all …

A third CD of various takes from the Sessions for the album, and another CD (titled “The Road To Tommy”) of work in progress recordings from 1968, including the singles “Dogs” / “Call Me Lightening”, and “Magic Bus” / “Dr Jekyll And Mr Hyde”.

Thing is these 1968 recordings I don’t believe are a nascent Tommy – I believe that was a singular and separate concept, but there are certainly some themes, thoughts, riffs and motifs here which would be re-cycled or re-purposed for Tommy.Like Quads from 1966 (which spawned “I’m A Boy”) or Lifehouse, what this is may be an embryo of an idea, or an unrealised story which would later be broken-down with the best bits salvaged.
Completing the CDs is a disc of Pete Townshend demos which sound well formed – Townshend would always attempt to provide a fully formed demo of his vision for a song and these are no different.

The only issue I have is, that although nice to have – and I think I have 3 albums of Townshend demos (the Scoop series) – I’m not sure they’ll get many plays. Maybe once or twice, but not as often as the original album (but now I have to choose the mono or stereo versions).

The 7” singles in the box are:

- the UK Track single of “I Can See for Miles” / “Someones Coming” (both mono versions)
- the US Decca single of “Magic Bus” / “Dr Jekyll And Mr Hyde”.

That may be it for the music, but in the package is a host of extra bumph as we would expect from Super Deluxe boxes.

First off is an 80-page, hard-back full-colour book, including rare period photos, memorabilia, track by track annotation and new sleeve notes by Pete Townshend with comments from the likes of Pete Drummond (Radio Caroline DJ), Richard Evans (designer) & Roy Flynn (the Speakeasy Club manager).
And the extra bits and bobs are: nine posters & inserts, including replicas of the original album posters, a gig poster from The City Hall Newcastle, a Saville Theatre show 8-page programme, a business card for the Bag o’ Nails club, a flyer for Bath Pavilion concerts, a bumper sticker for Wonderful Radio London, Keith Moon’s Speakeasy Club membership card and a Who Fan Club newsletter and photo.

The vaults must now be pretty sparse for this period of The Who. This set offers just about everything before, during, and after this album.

Sell Out is the point where The Who became more focussed as a band on their work, rather than being a singles band, and it shows in Pete’s songwriting, Roger voice, the tightness of the band, and the fact that Sell Out contains no real duffers across it’s 13 tracks.

If you’ve heard (and like) the original album, what could be better than wallowing in the vaults of these songs and times, and all the additional stuff you get with it. 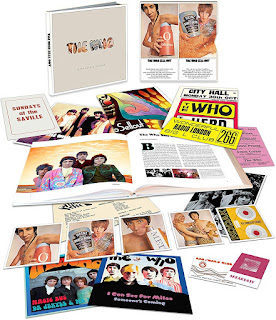 Armenia City In The Sky