The last Humdrum Express album dropped (as the cool kids say) just before lockdown - this meant that a highly competent collection of songs did not get the live airings and potentially reaching a wider audience it deserved.
Undeterred, the new album arrives some 27 months later, and I can report that normal service has been resumed.  More of the same gentle skewering of modern life, wry observations, exasperation, absurdity, and lyrical one-liners.
But this time, there's a little bit of politics and a cello.

Why 27 months?  Well, there's been a couple of lockdowns you know - and as a result, Ian states:

“Lockdown hit us all in different ways. I didn’t notice it at first but mixing with fewer idiots than usual was hampering my main source of writing inspiration. I eventually took the unusual step of posting a song idea on Twitter.

“The positive response gave me the encouragement needed and 24-hours later, "Denim In The Dugout" was finished. Finally back in the groove, 12 more songs came tumbling out to complete the project.”

The songs herein cover varying subjects including spending Christmas on Bondi Beach with the frontman of The Lemonheads. Peter Shilton on social media, the life of third choice goalkeepers, peculiar collectibles, people who’ve built pubs in their gardens, manscaping, and those who talk loudly at gigs (and are blissfully unaware that there is anything wrong with that).
It's not too much of a leap - and a very possibly simplistic stance - to say Humdrum Express are not far from Half Man Half Biscuit with a Midlands accent.

That little bit of politics mentioned on track 1 -"Brave Boy" - reciting the upset at getting a vaccine sticker rather than an enamel badge.  There can't be too many songs that mix trypanophobia with a political outburst.

"I'm aware the cost of a badge might be seen as a drain on resources, but this jab was an achievement for me.  It wasn't me who spent 37 billion on a failed Track & Trace system and millions more more on deficient PPE"

Mate ... I didn't even get a flipping sticker, but I agree with your assertion.

Now before you think Ian Passey's gone all Billy Bragg militant, this is the only time that the real world enters proceedings.
(Actually, not true - "What A Time To Be Alive" identifies the fact that we may all have to work until we're 85, but doesn't go down the "overthrow the Government" route.  It does off a sarcastic air punch at the end though)

Humdrum normality is restored with "Christmas With Evan Dando" - the unlikely tale of finding yourself in Australia with The Lemonheads frontman, followed by another 11 folk-indie-ska-infused, sometimes spoken word observations of the possibly un-important but actually in need of investigation (maybe even rectification).  At one point he even goes a bit Morrissey on "Manscaping" (or that's what my cloth ears heard anyway)

"The Gig Chatterer" recounts the scourge of musicians and gig goers that - like rats in London - you're never more than 6 feet away from a knobhead talking over the performance.

"One Man's Tat (Is Another Man's Treasure)" is an investigation of the stuff that people collect - to be honest, I collect some odd stuff (examples: books about the London Underground, Viz Comics) but that list there is primarily tat (in my humble opinion).  Although I do enjoy the line about having a collection of yellow, green and brown snooker balls - bought as a baulk buy (well, it made me laugh).

And another thing ... Football Managers are wearing Jeans!
Now whilst some of the names may change (such is the fickle world of Football Management) the exasperation at those who used to wear a suit or training gear have now gone all casual is evident.

No foul committed the ref says play on

Garry Monk's transferred to spray on

All aboard the Humdrum Express ... and a ruddy good time is guaranteed. 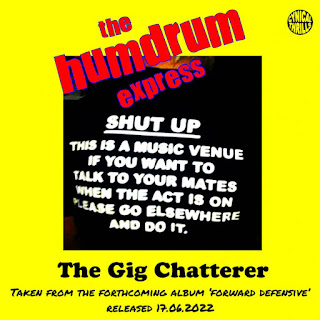 Denim In The Dugout

More here if your interest has been piqued
https://soundcloud.com/thehumdrumexpress/tracks

And if you want the whole album (and any others):
https://thehumdrumexpress.bandcamp.com/album/forward-defensive