Anyway regardless of my rubbish explanations of meaning, Pete Shelley & Howard Devoto were responsible for bringing the Sex Pistols to Manchester for the infamous Lesser Free Trade Hall (attended by about 2.5 million people apparently)gig.  They met bassist Steve Diggle at the venue that night, and hired drummer John Maher through an advert in the music press.
The Sex Pistols were back in Manchester a couple of months later, and The Buzzcocks opened the show, playing their first ever gig.

In December 1976, the band recorded their debut EP with Martin Hannet producing.  With no record company interest, and in the spirit of "Do It Yourself", The Buzzcocks pressed 1000 copies of the 'Spiral Scatch' EP on their own New Hormones label.  This act is generally accepted as the first of the independent record labels, which sprang up around the UK in the late 70s.

Following the release of 'Spiral Scratch', Howard Devoto left the band, officially due to "academic workload", or un-officailly because he foresaw the increasing commercialisation of the punk movement.

With Devoto gone, the band re-modelled themselves with Pete Shelly taking over vocal duties, Steve Diggle moving to guitar and Garth Smith joining on bass.
It was this line-up that signed to United Artists on 16 August 1977 - any other date would be just a moment in history, but this was the date that Elvis Presley died (although this probably has no relevance to the career of the Buzzcocks).

Their first single in October was "Orgasm Addict", which for some reason didn't get played on the radio.  In November, Garth Smith was fired for enjoying a bit too much falling down water, and was replaced by Steve Garvey.
Their next single "What Do I Get" started a run of 8 singles over the next 18 months which are some of the best noises committed to vinyl.

And then in the midst of record company problems, financial problems and band lifestyle issues (OK, drugs) they split.
It is either impeccable timing, or sheer luck, that the Buzzcocks were (a) right there at the start of punk, and (b) got out before the whole shebang turned into the cartoon facsimile that it became.


For the archetypal pop-punk singles band, the first album ('Another Music In A Different Kitchen') is essential, the second album ('Love Bites') maybe not as essential as the first, but is definitely worth owning and the third ('A Different Kind Of Tension') should be got so you have the complete set.  The prime reason for owning the third album, is that it includes one of their last singles, and possibly best songs, "I Believe".  Record company difficulties (ie UA being swallowed up by EMI) seemingly consigned this single to the sidelines, resulting in the single failing to make the Top 40.

And I Believe (d'ya see what I did there?) that The Buzzcocks are the fourth members of the (un)holy trinity of Punk, alongside the Pistols, The Clash & The Damned.
And also they have possibly the most perfect singles collection with "Singles, Going Steady" 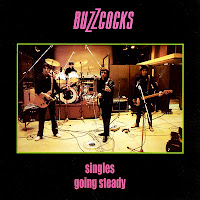 Released in 1979, and contains 16 absolutely perfect pop-punk nuggets, recorded between 1977 and 1979 (sadly missing the two singles from A Different Kind Of Tension, but this does not detract from its absolute necessity of ownership)

Footnote: The Buzzcocks have re-formed a couple of times with varying line-ups since 1989.  They have released 5 albums since then, the pick of which (in my opinion) being 2006's "Flat Pack Philosophy".
They are also on tour in 2013 - more info at buzzcocks.com