It's All About The Size Of Your Wad

or so it would seem in the case of Bernie Eccleston.

Lawyers for Bernie Ecclestone say the Formula 1 boss is ready to pay a German bank 25 million euros ($34m; £20m) to settle a court case against him.
The 83-year-old went on trial in Munich in April, charged with bribery and incitement to breach of trust.
He is accused of paying a German banker 33 million euros to ensure a company he favoured could buy a stake in F1.
If found guilty, the F1 boss could face a 10-year jail term and the end of his decades-long dominance of motor racing.
http://www.bbc.co.uk/news/world-europe-28547377

So, a very rich man indulges in a bit of bribery and gets caught.
The case goes to court, and ordinarily a conviction would be expected followed by a lengthy jail term.
But wait?  Bernie is monied-up, so how about he just chucks a bit of dosh around and it will all go away.

Seems to me that if you have cash, then you can get away with just about anything.  Whereas, in the real world you just have to face the consequences of your actions.
Well, mucho respect to you Bernie for doing the right thing and trying to wriggle out of it by flashing the cash.  Top man.

Although, if you are the spitting image of Andy Warhol, you could always claim mistaken identity. 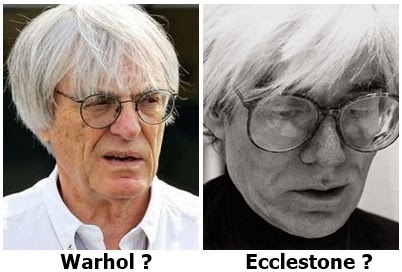